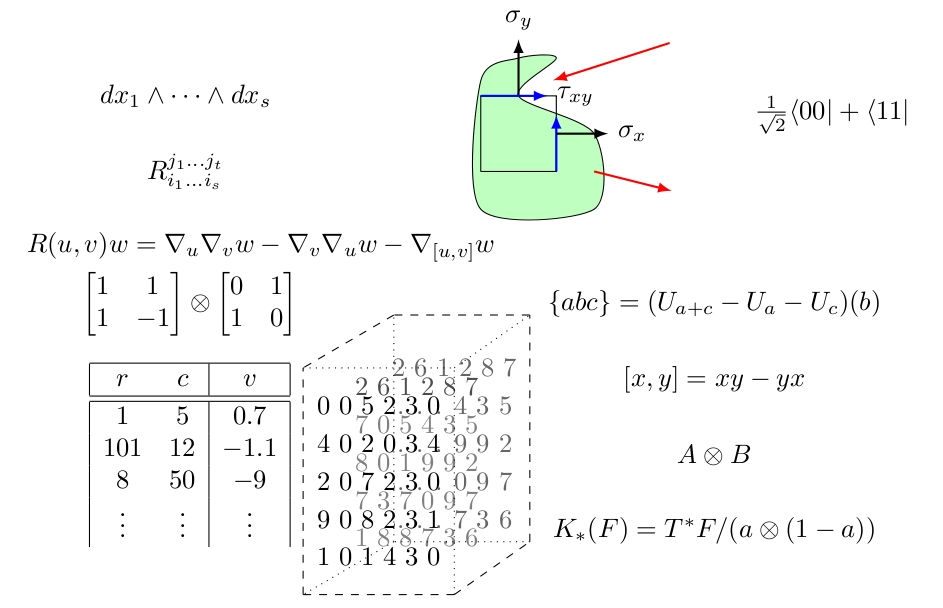 A vector today is any element of a vector spaces. That convention dissolved arguments on what vectors should be. They could be arrows, rows or columns, functions, or differential operators. It opened the door to vectors of any shape or size. Attaching the formal laws to the space was enough to manage a theory of vectors but imposed almost no restraint on the physical reality of a vector. Tensors can be likewise defined, or at least that is the point of view we recommend.

This indirection gets around the problem of 150 years of evolution since Hamilton introduced the word “tensor” in his opus Elements of Quaternions. In that work Hamilton also introduced us to the word “vector” and gave us the axioms of a vector space — though it would take the evolution of Set Theory and universal algebra to make it the definition we now enjoy. You can find the story of how we got from Hamilton’s concept of tensor to todays meaning here.

The scheme for defining tensors is thus to apply the rigorous axioms to a tensor space, then the actual objects we call tensors are free to take on diverse meanings. Indeed in the literature one finds tensors of row vectors, matrices, lists of matrices, arrays, functions, differential operators, integrals, multiplication tables, algebras, modules, multilinear maps, curvatures, stress formulas, quantum entanglements, meta-data, big data, statistics, and more. See the image above

Below we walk through all the ingredients but let us begin with the definition now even before we detail all the semantics so that the essential words and the arc of the narrative come into focus.

Therefore it must be emphasized that to be a tensor it is not enough to be a vector! Indeed, every tensor $t\in T$ demands also an interpretation as a multilinear map: \(\langle t|:V_{\ell}\times\cdots\times V_1\rightarrowtail V_0.\) (The symbol $\rightarrowtail$ signifies multilinear as we shall define below.) This is the real power in the study of tensors that turns grids of numbers and diverse objects into a system that can be studied cohesively as one theory.

If you are looking to use tensors in software take a look at Chapter 2 of our manual for our Magma software found here.

We here define tensor spaces over vector spaces, but as anyone who knows the word “module” can guess, these definitions apply far more broadly.

For contextual brevity we let Greek fonts denote scalars and Roman fonts vectors. We include this well-known concept mostly as excuse to demonstrate our Dirac notation.

Yes, this notation is a gimmick but it is memorable and adopted heavily in physics. Having experimented with many alternative notations this notation appears the most light-weight for the calculus of tensors. One critical difference is that we here are content to map into any vector space $V_0$. In physics one assumes $V_0=K$, in fact, one assumes $K=\mathbb{C}$. We make no such conventions. 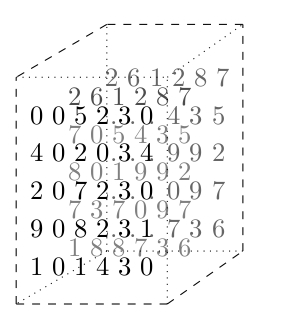 Software packages are keen to take such creatures as the very definition of a tensor, but doing so ignores almost all applications. So these are just examples.