Graded algebras are the path way between general algebraic structures and tensors. Suppose we have an algebriac structure $A$ and an index set $M$ which identifies a direct product decomposition

Often graded algebras arise from filters. You can see more about that in the filters package.

So the graded algebra assumption states that each $A_s$ is an abelian group and the following.

This sets up a number tensors, for example bilinear maps (3-tensors)

but also tensors of general valence such as

In the graded algebra project we focus on isomorphism by searching out sections of $A$ that minimize the search. If these cannot be found we start a process of breaking up homogeneous components $A_s$ into smaller parts by refining the grading. Refinement is carried out by our filters package.

Here is an illustration of a bad layer, because its total surface area is larger. 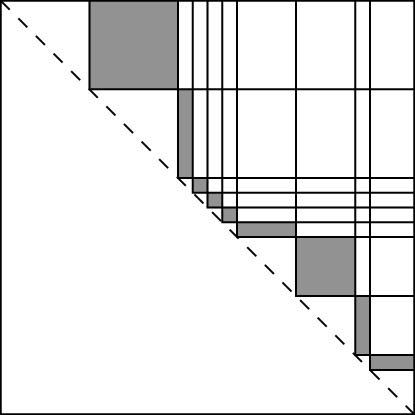 By refining and scanning the other layers we can find a potentially small surface area layer.

The ability to testing isomorphism from the middle is described in [BOW]. Further strategies for refinement were dealt with in [BGLQW].